Randy Steinberg, trumpet, piano and bass clarinet player, received his musical education at Roosevelt's Chicago Music College in Chicago, Illinois. Randy started out as a high school band band director, later changed careers and is Director of the Northwest Concert Band, which he conducts. Randy is also a prolific composer having written numerous works for concert band, jazz band, brass band and many works for brass ensembles that are published and played all over the world. Having taken over from the band's founding director, Ralph Wilder, Randy is honored to be leading such a talented group of musicians! 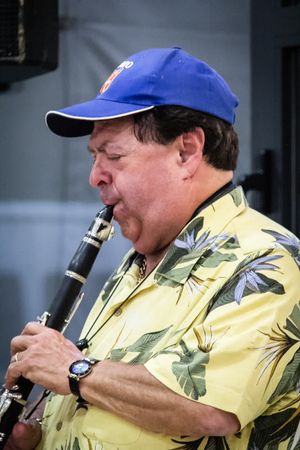 Our founding conductor, inspiration, and driving force, Ralph Wilder passed away in March, 2022.  He received his bachelor's and master's degrees in clarinet performance and education from Northwestern University and began his career as bandmaster in Texas before holding the same post at Prospect High School in Mount Prospect, Illinois.  His life in music included having is own orchestra, playing with various orchestras in the region, most notably as principal clarinet in the Evanston Symphony Orchestra and the Maxwell Street Klezmer Band.  Ralph was versatile playing various clarinets from the bass to E-flat instrument, alto and tenor sax and flute.  He was a great jazz improvisor.  In addition to many private students, he also taught at North Park University.  As conductor of the Mount Prospect Community Band, he led the group to England, France, and Italy (twice).  The band hosted groups from France and Italy in return.

Several years ago, Ralph suffered a catastrophic injury while at a rehearsal.  Unfortunately, he could not recover from the accident and died of complications from it.